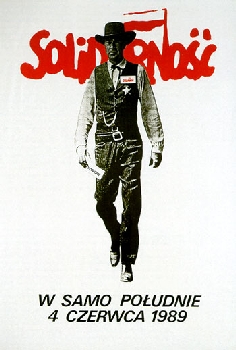 It seems hardly any time ago now, but in August 1989, I was heading into a revolution, and the birth of the world as we know it today.

That summer, I wasn’t long back from a year working in Southern Africa. I had a bit of money from a temp job in my pockets, and two months to kill before I started at university. While I’d been in Africa, I’d been reading Time and Newsweek whenever I got the chance, and I knew that things were stirring in the Communist countries of Eastern Europe. I decided to take the train to Poland to see… well,  whatever was there to be seen. I tried to persuade friends to come along but no-one was up for it so, armed with Fodor’s Guide to Eastern Europe, I went alone. What I found was an upswelling of hope and idealism; a feeling that a better future was on the verge of arriving.

Bliss was it in that dawn to be alive,
But to be young was very heaven!

It was a dramatic journey. Crossing into East Germany, the train was boarded and searched thoroughly by high-hatted customs guards in greatcoats. With German Shepherd dogs straining on their leads while the guards opened suitcases and looked under seats, it was a scene straight out of a WWII movie – except that my British passport meant they ignored me, it was the Poles they were interested in (on the basis that they were probably smuggling consumer goods back from the West). Sometime after midnight, the train stopped in Berlin, the station brightly lit; I was tempted to disembark and stay a few days, but I had no Deutschmarks, or even a guidebook, so I stayed on the train. Before the year was out, the Berlin Wall was torn down, and I’d lost my chance to see it for ever. In December, the Romanian dictator Ceaucescu and his wife were shot in front of TV cameras. It was a year of revolution.

August 1989 was a rare time to be travelling – the right time, the right place. In that month of August, the citizens of the Baltic States formed a human chain hundreds of miles long to demand freedom from Soviet domination. Hungary had opened its border with Austria, enabling East Germans and Bulgarians to pour through the Iron Curtain in their thousands to the West.

Although we didn’t realise its significance at the time, a critical event for world history had taken place just days earlier: students in Beijing had been protesting in Tiananmen Square against the rule of the Communist Party; the Party had dithered over its response until, finally, the hardliners won out. Like millions around the world, I had watched the TV news in horror, as soldiers drove tanks over students’ tents, and opened fire on the protestors. The protests were crushed.

The world we live in was born at that moment.

Throughout Eastern Europe,  protesters who had identified with the Chinese students were galvanised with outrage and passion – and an appalled Mikhael Gorbachev was driven to promise that the Soviet Union would not fire upon peaceful demonstrators, and would not intervene militarily in other countries.

The teeth of the Soviets were drawn by Tiananmen and, with the threat of violence removed, the Communist governments of Europe fell like a house of cards.

Protest had been building in Poland for years; by the time I got there, the Solidarity movement was just about to lead the first post-war non-Communist government.

I got off the train in Poznań, just over the border from Germany, and travelled anti-clockwise around the country in local trains. From Poznań I went to Wrocław, where students had painted tank tracks onto the pavements in solidarity with the Tiananmen victims. From there I went on to Kraków (taking a detour to visit Oświęcim – the Auschwitz extermination camp), and finally to Warsaw. I had planned to go on to Gdańsk, where the Solidarity movement had begun, but by now, 10 days into my trip, I was getting lonely – I spoke no Polish and, in those days, nobody in Poland spoke English. I did speak some Russian, which Poles had been made to learn in schools since the Second World War – but, after my first few attempts to use it, I realised how much the Poles hated the Russians, and decided to use mime instead!

Everywhere I went, as I circled Poland, there were brass bands playing, Solidarity banners flying, and a sense that the long night of Soviet control had ended. It was exhilarating.

The Soviet Union itself was also in deep trouble in 1989. Ronald Reagan and Margaret Thatcher had, a few years earlier, opened the spigots of cheap oil from the North Sea and the Middle East. The Soviet Union depended on its oil exports to keep its economy going; when the global price of oil crashed due to the increased supply, the USSR started to run out of money. In August 1989, though nobody realised it, the tipping point had been passed; just a couple of years later, the USSR simply and literally vanished overnight.

It’s hard now to understand how astonishing, even incomprehensible, that was. Fear of the Soviet hordes; the knowledge that Red Guard tank brigades were constantly poised to flood through the Fulda Gap into western Europe; the omnipresent dread of nuclear war… it all just went away. Overnight.

The ‘peace dividend’ had arrived. All of the resources that the Western economies had been directing to waging the Cold War could now be used for consumption. In the UK, the 90s saw the social tensions of the 70s and 80s dissolved by newly-available cheap money, and the British became hedonists.

In China, the consequences of Tiananmen Square were still reverberating, and were soon to spread across the globe. To avoid a repetition of 1989’s unrest, Deng Xiaoping toured the South, and declared that to get rich was glorious. The Communist Party would retain its monopoly on power – by allowing the people to pursue material well-being. The masses of China rejoined the global economy, and rapidly became the workshop of the world.

With the Cold War winding down, the internet – funded as a military project – could be released, and the World Wide Web went public in 1991, unleashing the e-commerce revolution.

For twenty-five years, these factors have led to abundance and never-before-seen levels of prosperity in the West. The students I’ve taught in Singapore, China, and the UK have known nothing else; to them, this is the natural order of things. Even those of us who were there are forgetting, I suspect. When did you last think about ‘the Iron Curtain’? How often do you think back to the days before Google?

In August 1989, I took a train to Eastern Europe just as a revolution in world affairs was taking place. In January 2014, I’ll be taking a train to Russia just the world created in 1989 is teetering in its turn. Once more, I’ll be travelling through a revolution – but of a quite different kind. It’s a much harsher world that is being born now; I’ll discuss this in my next post.