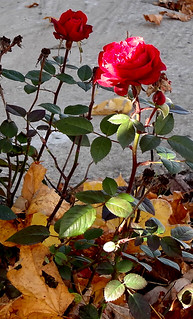 Let me pose a question: who are you, really?

An unexpected aspect of my recent round of interviews was having to explain to people in various countries why the phrases “Yunfei” or “Flying Cloud” kept cropping up in my assorted social media identities.

Back in 2004, I spent my first period living in Beijing when I attended a language course for a few months. During that time, I started training in a martial art called baguazhang; when the language course ended, I spent a further month training full time in bagua before returning to Singapore to begin my MBA.

Like most Westerners in China, I wanted to have a Chinese name. I wanted it to mean something, though; a majority of foreigners seem to acquire a Chinese name that sounds somewhat like their Western name, but that has at best a contrived meaning in Chinese (if it has any meaning at all).

In the event, I received my name from my baguazhang teacher, Zhang Sheng Li. The family name was his own: Zhang, one of the most common names in China. For a personal name, he gave me “Yun Fei”, which translates as “Flying Cloud”. His reasoning was that practitioners of baguazhang move swiftly, and are evasive – being as difficult to strike as a flying cloud. The name also sounds similar to “Yue Fei“, one of the great heroes of Chinese literature and history. In this way, the name is a constant reminder of the virtues that Yue Fei represented.

I was using this name during the period in which the social media we now take for granted – gmail, Facebook, Twitter, Skype, etc – were introduced, so I naturally incorporated my Chinese name into my handles. This reflected the way in which I was learning a great deal about Chinese culture, and finding huge value in it. It was also a reflection of the extent to which I felt I was integrating in the Chinese community.

All of this makes an entertaining anecdote, but it also contains an important learning point. Are Yunfei and Emlyn the same person?

‘Yunfei’, to those who understand what it means, conveys a certain set of Confucian and Daoist values and assumptions.

‘Emlyn’, on the other hand, is a very traditional Welsh name, having a completely different set of associations for those who know the historical and cultural context.  Derived from the Roman name ‘Aemelianus’ (meaning: “of the clan of the Aemilii”), it spread throughout the Roman Empire, from Wales in the far west to the Byzantine provinces of the east. From Constantinople, it spread to Russia – where, for example, the leader of a great Cossack revolution was also an ‘Aemilianus’: Yemelyan Pugachev. (I suspect that in Russia I will be ‘Yemelyan’ rather than ‘Emlyn’).

To complicate the matter further, I went by a nickname most of the time while I was at school – a nickname which I carried with me into my undergraduate days. It was only after graduating that I started using my real name as a matter of course. When I go to the pub these days, many of my contemporaries still call me by the old name – much to the confusion of those who have only known me as an adult!

So which is the real me? The Chinese Confucian martial artist? The Welsh-speaking inheritor of Romano-British culture? The Cossack revolutionary? The schoolboy of decades ago?

Each, of course, represents a facet of my true identity. Each filters out aspects that a particular person or group don’t know about, or don’t wish to know about, and so delineates a set of expectations who I am supposed to be. Each, in representing values, shapes the way in which I will actually behave: I will interact with someone who knows me as Yunfei somewhat differently to how I behave as Emlyn. If our personalities are derived from habits and learned behaviour, then in this way the name actually shapes the underlying identity.

I’m fortunate in that, by having lived in different cultural contexts, this has been made so clear. The same effect is true for us all, though, and plays out in multiple ways.

One of the more damaging examples concerns the labels that others apply to us. For example, I worked as a systems analyst for a number of years. A number of people of my acquaintance consequently mentally filed me as an “IT geek” – a label which I’ll proudly wear! However, along with the label came a set of preconceptions about how an IT geek should behave, and what an IT geek should be interested in. Ever since, these people have – often quite visibly – experienced a severe cognitive dissonance when my interests and work failed to fit the stereotype, being unable to take seriously work that I’ve done outside what they consider to be my proper domain. That’s bad for me, and bad for them.

A different issue arises when, through habit, we accept others’ labels, and try to live up to them. My last blog post brought a response from a friend who was considering quite a major life change. Her friends and family oppose this, and were giving her advice to stay where she is. It’s a situation I know well – I encountered a lot of opposition when I decided to learn Welsh, for example. There are times when an opportunity for personal growth requires us to break the parameters of labels that others have applied to us: that’s painful for them. If we have allowed those labels to define us, and fallen into the habit of conforming to them, then personal growth can be all the more painful for us as well – indeed, it may be so painful that we don’t go through with it.

Name can impose expectations we try to live up to; they bring associations other people try to fit us in to. If we don’t maintain awareness of these, our behaviour and thinking becomes shaped by them; the name creates the identity. Labels create attachments, and the fear of losing or breaking them. Personal identity becomes a shared creation, not entirely under the ownership of the individual. Some people are quite happy with this; others are unaware of it and unhappy. (This may historically be the natural way of things, which again creates dissonance between people from different cultures – I’ll return to this in a future post).

As individuals interested in personal growth, the lesson is to build an awareness of this process in our own lives. What names and labels have been applied to us, and are they shaping us? Are we developing habits and attachments that might become barriers to our future development?

Equally important is to be aware of our own behaviour towards others. Are we dealing with them as they truly are? Or are we only interacting with the label we’ve given them?

Shakespeare, writing about two young lovers who could never find happiness because of their names, reminds us to look at the true nature rather than the label.

‘Tis but thy name that is my enemy;
Thou art thyself, though not a Montague.
What’s Montague? it is nor hand, nor foot,
Nor arm, nor face, nor any other part
Belonging to a man. O, be some other name!
What’s in a name? that which we call a rose
By any other name would smell as sweet;
So Romeo would, were he not Romeo call’d,
Retain that dear perfection which he owes
Without that title. Romeo, doff thy name,
And for that name which is no part of thee
Take all myself.

A rose by any other name is still beautiful and fragrant; a rose by any name has thorns that pierce and bind. Being aware of the name of the rose, being able to see the reality rather than the name, is an important step towards fulfilling our potential.

Image: Concrete Rose by massmarrier, on Flickr. Used under a Creative Commons license.